Part of an ongoing series of my adventures in learning how to grocery shop on a budget, almost exclusively at health food type stores.

I’m back with another budgeting post after a weekend grocery haul and I can proudly say that I spent a lot less than last time. Like, I spent less than half the amount I did last time! This girl is definitely learning how to budget. Or maybe it’s just because I was extremely limited in funds this time around, with just over $50 to spend. Luckily I didn’t have to make any major purchases since my lovely mom was nice enough to buy me some much-needed items last weekend so this was mostly a fill-in type trip for things I am about to run out of or needed for recipes.

This week, I happened to do a lot of bulk buying. This is a great thing for budgets–you can just stock up on what you need, and generally things in bulk cost less ounce for ounce than things that are prepackaged. The bulk bins at Whole Foods and Sprouts have saved me a ton of money on must-try items like coconut flour, flavored nuts and nutritional yeast. Now let’s check out the goods! 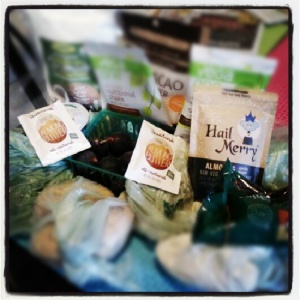 Check out all the bulk bin bags!

I just stopped in for a few items I was hoping they’d have for less than Whole Foods, and they delivered. Well, kinda. The unsweetened coconut shreds I bought actually turned out to be a bit cheaper at WF, which kinda made me mad but I’ll know next time!

What I Got: Let’s Do Organic reduced fat unsweetened coconut shreds, So Delicious Greek-style vanilla coconut yogurt (finally they had this flavor!)

What It Cost Me: $4.99 (I paid with a 5 dollar bill, woo for having cash for little purchases)

Verdict: If only every shopping trip could be this cheap!

I whittled down my original list to just a handful of must-have items and I did really well with sticking with my budget. I actually ended up with just under $10 left, which is awesome. I got 15 items here pretty cheaply, because I bought a bunch of bulk stuff and did some price comparisons for similar items.

What I Got: bulk almond flour, bulk raw macadamia nuts (I only bought about 1/8 of a pound, so they were super cheap), bulk nooch, bulk spelt flour (I was going to buy packaged buckwheat flour but it was $5 and this was just $2 per pound and pretty comparable, nutrition wise), vegan semisweet chocolate chips, Navitas Naturals raw cacao powder (a splurge at $10, but worth it), 2 Justin’s vanilla almond butter squeeze packs, 2 Vega One protein powder samples (running low on protein powder but didn’t have enough money to buy a full container), Hail Merry raw vanilla almonds (super cheap at just $3 for a raw product!), bulk loose spinach, Hannah yams (these look like regular potatoes but they’re apparently sweet potato-like), vegan cookie from bakery area, black figs (on sale for $3.99/pound, I got half a pound!).

Verdict: I was really smart about my Whole Foods trip this time around. I bought in bulk to save some money, weighed my bulk items to estimate how much they’d cost me and didn’t buy anything not on the list. Yes, there were some things I took note of that I wanted to buy another time–like, ahem, raw macaroons!–but I didn’t feel like I needed to get them since I know they’ll be there when I have more money to spend.

I am definitely getting better at this budgeting thing. It feels fun to me now, instead of like a chore. I love doing comparison shopping and balancing out my purchases so they don’t end up surprising me at the register. And I’m learning the difference between splurges and staples, which is something that used to get me all the time. Some weeks, there’ll be more room for splurges and other times I’ve gotta stick with the list. And I feel like this week, I struck the perfect balance between getting the basics that I need and getting to try new-to-me items, like the almond flour and yams and almonds.

Do you like to buy things from the bulk section? What tips do you have for budget shopping?

So I haven’t done a legit WIAW (aka, posting all my meals from one day) in a really long time…why not do one now? I managed to take Instagram pics of basically everything I ate on Sunday so here it is! 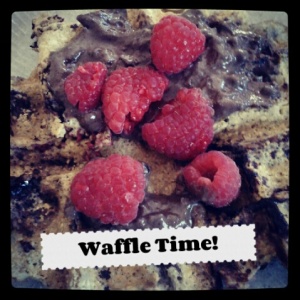 It’s obvious that I’m obsessed with waffles for breakfast. But I haven’t spent a dime on frozen waffles in probably 2 years. Why not make your own, with all the things you want and nothing you don’t? My waffle maker is getting so much use by me that my mom said I could take it with me to my apartment! My basic recipe always includes oat flour, baking powder, Truvia, unsweetened almond milk and chia gel. But I always include add-ins. And you can’t forget the protein frosting, that’s the icing on the waffle. 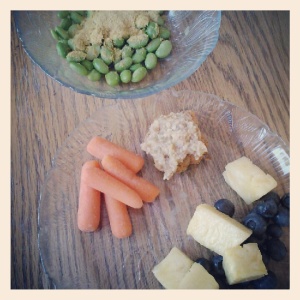 I love having edamame at lunch! Lately, I’ve been increasing my protein and it keeps me so satisfied. I’m not straying from veganism for the sake of protein though–there are plenty of plant based proteins that I’m obsessed with. Edamame is definitely one of them, it’s just so good and easy to make. And it tastes awesome with nooch–sounds weird, but it does. 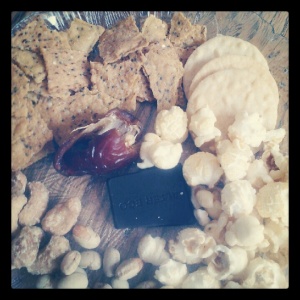 I don’t think it’s possible for me to get sick of snack plates–there’s just so many combos! I always have a good mix of carbs (sprouted chips, rice crackers and organic kettle corn), protein (edamame), fat (cashews) and fun (chocolate and date). I just love the mix of flavors and textures, plus it lets me be indecisive 😉 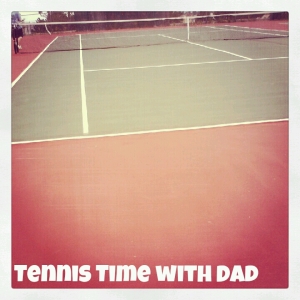 I’ve been trying to play tennis with my dad every weekend this summer. It hasn’t always happened, but we’ve been playing a lot and it’s always a fun break from the norm. On Sunday we only played for half an hour since we started out late (around 5:50 pm) and the clouds were rolling in but we were running around the court more than usual. 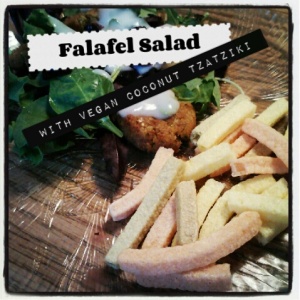 I was feeling lazy and uninspired when dinner rolled around but I decided to make use of some falafel balls taking up space in the fridge. I whipped up a vegan tzatziki sauce made from some coconut milk yogurt I just bought, topped some greens with the baked falafels and sauce and had some veggie straws and a protein smoothie on the side. It was actually a great dinner, especially for being on the fly!

salt and pepper, to taste

Scoop yogurt into a bowl. Add in cucumber, mint leaves, garlic and lemon juice. Stir until combined, and add in salt and pepper. Let sit for 10 to 15 minutes to let flavors mix. Makes 4-5 small servings. 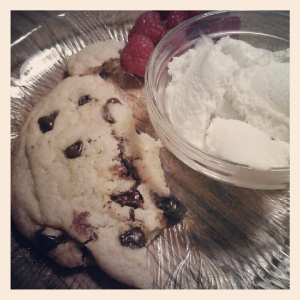 I know I post a picture of a vegan cookie and ice cream all the time, but I don’t have it every night! The cookie I buy maybe once every two weeks when I hit up Whole Foods, and I split it in half to make it last two nights. And I have a small bowl of vegan ice cream a few nights a week, it’s just too good not to enjoy often! But it’s expensive so I try to make it last!

I just noticed that I was obsessed with chocolate and berries on Sunday–not bad obsessions at all 😛 Actually, I’ve been loving both a lot lately, along with pineapple, mango, quinoa and sunflower seed butter. Hey, food ruts aren’t all bad!

Have you been in any ‘food ruts’ lately? Do you like eating salads for dinner?