Hi guys, long time no see huh? It’s getting to be that time of the year again…back-to-school time! So I’ve been pretty busy the past few days getting everything packed and ready for second semester. I’m actually really excited to go back–my classes seem interesting, I’m ready to do weather anchoring again and I can’t wait to be back in my apartment so I can do whatever the heck I want. Don’t get me wrong, I love my family to pieces, but I need my alone time sometimes and having my own kitchen again will be nice.

Since life’s been cray over here, I’m gonna borrow a little survey I spotted on Amanda’s blog the other day so enjoy…and I’ll be back next week with some updates!

Current Books: Erm…uh…I’m actually not a big book reader (please don’t hate me!). I do have some books I love, like Dave Barry (he is hilarious!) and the Sisterhood of the Traveling Pants series, but I haven‘t actually read them in awhile. I am loving Veganomicon though–so many delicious vegan recipes I need to try out.

Current Music: Anything by Foster the People. Love them. I just added their station to Pandora and I’m addicted. Right now I can’t get Houdini out of my head.

Current Guilty Pleasure: Lotions from Bath & Body Works. Seriously, can I just buy them all?! They smell so delicious…

Current Nail Color: OPI’s Giftcards for Everyone. Oh, and Sally Hansen’s Posh Plum on my ring fingers. I got the OPI color as a mini giftset for Christmas and the colors are perfect for winter.

Current Favorite Show:  I heard the new season of WNTW (What Not to Wear) is on so I really need to start watching that again, I really missed my Clinton & Stacy fix. Other than that, I think 1600 Penn is hilarious and I love Chopped on the Food Network.

Current Wishlist: I would love some Starbucks and iTunes gift cards because I’m cheap and don’t want to pay for my own coffee and music #collegeproblems

Current Needs: Not sure if this is more of a need or a want, but dumbbells. I really want more muscle and bodyweight training alone isn’t cutting it. I’m really wanting to start a strength training routine so I’m planning on hitting up Target soon to pick up some cute and colorful weights.

Current Bane of My Existence: The fact that everyone is coming down with the flu, and I reaaaaaaallllly don’t want to get it. No such thing as hand sanitizer overload during flu season.

Current Celebrity Crush: Bradley Cooper. He was amazing in Silver Linings Playbook, and he doesn’t look half bad 😉 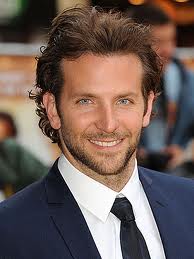 Current Indulgence: My recent trip to Whole Foods. A little over $100…yikes. Yes, it was a restock-my-apartment-because-it’s-foodless trip but still. Hope they’ll last me awhile!

Current Blessing: No snow in the forecast for awhile. I know we could really use the moisture but I’m already sick of winter and snow. Bring on summer!

Current Slang: Whatevs. I know that’s so old and lame but I don’t care, I still use it.

Current Excitement: My family’s spending the day with me tomorrow at my apartment and it’s gonna be fun! We’re going out to eat at my favorite vegan restaurant (which my omni family all love) and my sister and I will probably do some hardcore shopping and jamming out in the car. We’re so cool…

What I got the last time I went to Tasty Harmony…oh sooooo good!

Current Mood: Excited for tomorrow, and nervous for the semester to start.

Current Link: Zite. They have an app and everything, but I love it because you put in your interests and it generates new stories and articles on those and related topics for you to read…and it changes every day!

Answer any of the above!

After missing out on WIAW last week (being sick for a few days=no delicious food photos, or food period) I was itching to join in on the foodie party this week!

New Year’s Day is always a bit depressing for me–it marks the official end of the holiday season and it’s back to the daily grind and blah-ness of the winter season. Not that I’m complaining about getting back into a routine (I’m also not technically back into my normal routine for another 3 weeks when spring semester starts up again) but January is a bit of a letdown after the holidays. This year I want to be more excited about January so I’m soaking in my last few weeks of Christmas break and just enjoying the month for what it can be–a fresh start.

The usual post-Christmas shopping spree was on Sunday. The fam and I headed up to Denver for the day and my dad checked out the Van Gogh exhibit at the art museum while us girls shopped the afternoon away. Other than the clothes shopping (I’ll be sharing some of my purchases later this week!), I also convinced my mom to stop at Nooch Vegan Market, a fairly new addition to the city. It’s a small, all-vegan grocery store that stocks a lot of products that not even Whole Foods offers. I could have bought so many things, but I just left with some garlic Parma (a nut-based ‘cheese’ sprinkle), pico de gallo bean chips and a super-delicious dark chocolate chipotle caramel bar. The combo of coconut milk caramel, chipotle powder, dark chocolate and pecan/peanut pieces is incredible–I wish I had gotten more than one!

Maybe the last red cup of the season…

While shopping I sipped a short soy skinny peppermint mocha. I’ve never gotten a short at Starbucks before but it’s a good size option for when I don’t want to be too filled up by the drink. I’m sad about this picture though because I’m thinking that might be the last time I drink out of a red cup until November 😦

I have a new obsession with bok choy. It is sooooo good sauteed in a little coconut oil and topped with a thin sauce made from red curry paste, citrus juice and coconut aminos. It gets all wilty and delicious in the pan. New favorite veggie over here!

This was a weird (but good) snack. I love cutting up sweet potatoes into fry shapes and then baking them with some spices and then dipping them in everything and anything. Organic ketchup and peanut flour paste are the best options, of course.

The cookbooks I got for Christmas…I love them!

I generally don’t make things from cookbooks, but that’s only because I never had a vegan cookbook before this year. I was lucky enough to get two great vegan cookbooks for Christmas and I’ve already tried a couple recipes from them. Last night I made eggplant muffaletta sandwiches from Veganomicon for my family and they loved them.  It was literally one of the best sandwiches I’ve ever had, probably because I love the combo of olives, spinach and really good bread. I haven’t had bakery bread in at least a year (it’s a huge fear food of mine) but I got some ciabatta bread from Whole Foods specifically for this recipe and it did not disappoint. I guess eating bread, especially quality bread, every once in awhile won’t kill me! 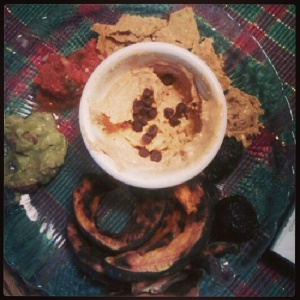 Another random snack plate. Roasted kabocha tastes amazing dipped in salsa and guac, don’t knock it til ya try it! 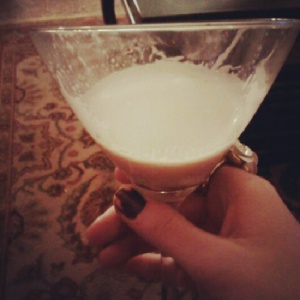 This was a coffee-lover’s dream cocktail. It tasted like a hazelnut latte! Like I’ve said before, I’m not a huge drinker (and I’m not planning on becoming one when I turn 21) but it’s great to enjoy a nice cocktail every once in awhile, especially for special occasions.

My dad and I made a quick stop at WF for some NYE snacks and I just couldn’t pass up the salad bar–they had a bunch of vegan Indian food options. I got some of my usual items, and then loaded up on the Indian coleslaw (not at all like traditional coleslaw but way better), green garbanzo curry, lentil dal and some battered veggies. It was an amazing last meal! 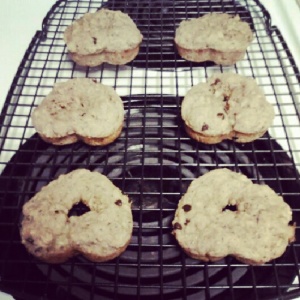 You knew I couldn’t go more than a week without trying out my new donut pan! I made some so-so pumpkin protein donuts over the weekend but I finally made some delicious (and healthier) donuts that I just had to share. They are pretty much like banana bread in donut form…

Preheat oven to 35o degrees. Spray a donut pan (I used a 6-cavity pan) with nonstick spray. In a large bowl, mix flax and water; stir and set aside to gel into an “egg”. Stir in all ingredients through coconut sugar. Add in spelt flour, protein powder, baking powder, salt and chocolate chips until a batter forms. Spoon batter into donut pan, filling each to the top, and bake for 10-12 minutes or until just set. Remove from pan and set out on wire rack to cool. Makes 6 donuts.

These donuts are a healthier morning option, made with whole grains and about 6 grams of protein per donut, and they’re made with natural sugars and not overpoweringly sweet. I’m still trying to experiment with gluten free and vegan donut recipes so hopefully I can have one up soon for all you GFrs.

What have you been eating so far in 2013? Do you like to cook from cookbooks?