Sorry I’ve been missing lately! I wish I could promise a more regular posting and commenting schedule but my life is about to get even crazier and busier in the next couple of weeks so I may not be around much. But I want to fill you in on what’s been happening in my (now) crazy life lately! 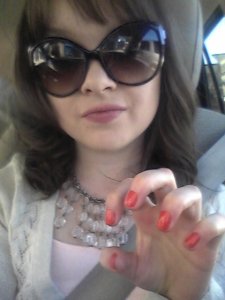 I don’t always get manis…but when I do, I take shameless selfies to show them off!

It all started on Wednesday. I drove up 2 1/2 hours to my college town to reunite with one of my best friends. We hadn’t seen each other since before I graduated in December and a fun girls’ day was in order. We got sushi for lunch with her boyfriend (I got an avocado maki roll and it was the cheapest lunch ever–like $4!) and then drove over to our favorite nail salon to get manis and then drove down to the outlet mall for a little shopping. We didn’t buy much (I only ended up getting a coral dress from American Eagle for under $20) but we had fun trying on different outfits and just reconnecting. She’s graduating in May so we talked a lot about our future plans. And I filled her in about my new job! I haven’t talked about it a lot here yet, but let’s just say I’m moving out of state in a couple weeks… 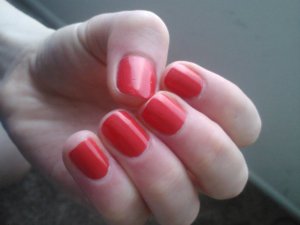 Of course, this chipped a couple of days later. 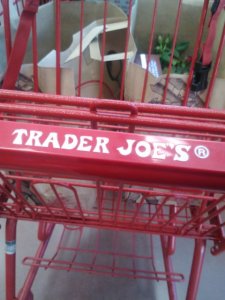 My first time at a Trader Joes! I fell in love 🙂

On Friday my mom and I headed up to Denver for a busy day of shopping and food. We got lunch at Native Foods first (my last time getting to eat there for awhile 😦 ) and then the moment I’ve been waiting for for at least a year…we stopped at the new Trader Joes! Colorado finally got with the program and opened up a few TJs last month, but since none are where we live, we had to drive about an hour up to Denver to check out the store. 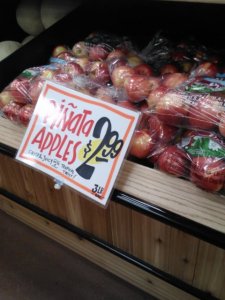 Their produce is so cheap but incredibly good!

The store was a little smaller than I was expecting it to be, but then again I’m used to Whole Foods and Sprouts which are a little bigger. But the selection is incredible! They had so many products I’ve never seen anywhere else, and a lot of stuff (like their raw almond butter) is just much cheaper than at any other store. It made me a little sad that I’m moving to a state that doesn’t have any TJs. Of course, I ended up with a bunch of stuff, including dried persimmon (!), almond butter, tofu burgers and a pink sea salt grinder. My mom was mostly impressed with their beer and wine selection! 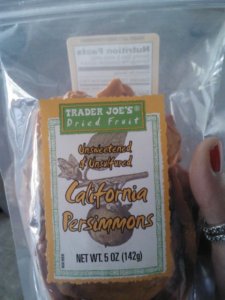 Where else can you find exotic dried fruits for less? 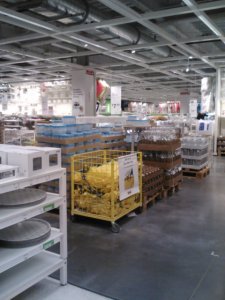 IKEA has my heart.

After a quick trip to our favorite ice cream place (they always offer 4 rotating vegan flavors and I got the spiced cider sorbet–just like apple cider!), it was off to IKEA! If you’ve never been to an IKEA, you won’t realize how awesome it is. It’s also a decent workout, as you have to walk through the entire store to get to the checkout. My mom and I went to check out some inexpensive furniture for my new apartment but we didn’t get anything other than a tabletop ironing board because we realized we won’t have enough room in the car to move it. And there’s no IKEA where I’m moving to, so any IKEA furniture will have to wait until I come back home to visit and I can take some back with me. 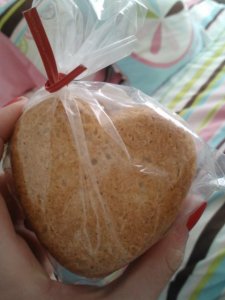 An amazing locally-made GF vegan cookie. So buttery and maple-y.

On Saturday my dad and I hit up a vegan pop-up market downtown. The weather was seriously crappy (windy, cloudy and cool) but luckily the market was held inside. It was a lot smaller than I was expecting it to be, but we got free samples of kale chips and green juice and I also got a couple locally-made gluten free vegan cookies. I wish I had bought more, because they were incredible. 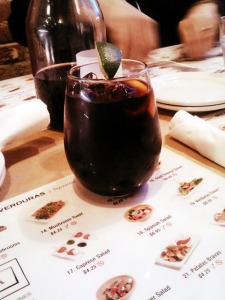 After church, it was time for my celebratory dinner out. My family doesn’t go out to eat often (once a month, if that) but we always do for special occasions, like birthdays and apparently job offers! I chose Tapateria, where I had my birthday dinner in July and even though we couldn’t sit outside because of the weather, it was still just as nice of an experience as it was the first time. We ordered a lot of the same things as last time, like the incredible fresh garlic bread (everything is gluten free, which I love!), the warm olives and of course, the sangria. I don’t drink that often (again, probably about once or twice a month) but I love sangria and I plan on making my own this summer. 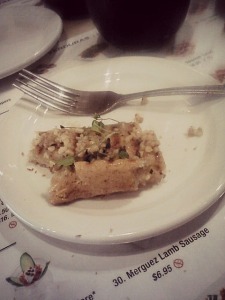 So fresh, so garlicky, so good.

It’s crazy that Saturday’s dinner was one of the last times I’ll be eating out with my family. I know it’s kinda hard on my parents too–my sister’s going off to college in the fall so they’ll officially be empty-nesters. I’m lucky to be so close with my family, so I know the transition period will be tough on all of us, but it’s nice to know that I’m always a phone call, text or 9 hour drive away from seeing them. 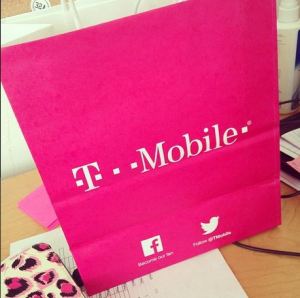 On Sunday, I officially became an iPhone owner! I’ve had an iPod touch since 2010 but all my smartphones have been Androids. I’ve been wanting an iPhone for awhile, and since T-Mobile finally offers them, I upgraded to the iPhone 5C. In pink, naturally. That phone is seriously my baby. I’m in love with iOS 7 and the feel of the phone. And I still have the best of both worlds, because my tablet still has all my Android stuff on it. Win win! The best part is, I can finally use emojis so…don’t be surprised if my Instagram is bombarded with them 😉

So there’s just a little glimpse into the craziness of my life lately. I’ve got one more post lined up for this week, and then I’m off to TX at the end of this week for spring break! Fair warning, my life will be even crazier post-spring break so I’ll try to keep up with commenting but I probably won’t post much for the next few weeks. See y’all in mid-April!

What were you up to this weekend?

Hey everyone, I’m back from my vacay! I’m kind of sad that I missed out on WIAW this week, but I had soooooo much fun on my vacation (to Estes Park, CO) that it was worth it. I was away from the computer for almost 5 days and I was surprised that I barely missed it at all. I did have my iPod Touch, but most of my vacation was spent disconnected from technology and it was fantastic.

We left early Saturday afternoon. Before we hit the road, I brought my dad with me to the local farmer’s market. My city has a lot of farmer’s markets but I’ve never been to one and this one was kind of in our neighborhood so we decided to check it out. It wasn’t that impressive, honestly. It was pretty tiny, with only a few tents scattered in a parking lot. I expected a lot more fresh produce, but there was only one tent selling fruits and veggies and they were mostly from the store. LAME! But one tent had some adorable kitties available for adoption (sadly, we didn’t get one). We did end up buying some homemade raspberry habanero jelly–I tried it and it is dee-lish! It’ll make some interesting AB&J sandwiches, that’s for sure. 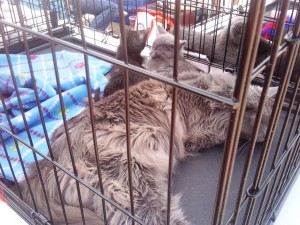 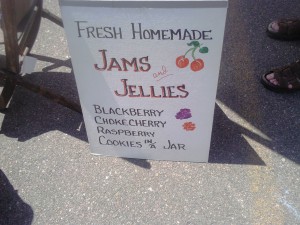 They had a lot of homemade jams there!

When we got up to Estes Park a few hours later, we unpacked our stuff at the condo we were staying at, hung out a little while and then headed out to dinner! Our tradition every year is to go to Poppy’s Pizza on the first night of our vacay. Poppy’s isn’t a typical greasy pizza joint–they actually have a ton of fresh ingredients, several vegetarian/vegan options and interesting combinations. Since I don’t eat cheese, I went for their hummus pizza. Oh man, was it good! I’ve had it a few other times but I don’t think I’m going to be branching out anytime soon 😉 The pizza had thick but not too thick crust, homemade hummus for the ‘sauce’, chopped tomatoes, spinach and Kalamata olives. It’s really simple but really good. I was only able to eat half the pizza (it was an individual sized one) but it made perfect cold leftovers for lunch. 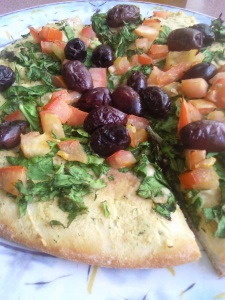 My amazing (and vegan!) pizza

We walked around town for a little bit and then grabbed a dessert. Estes Park has tons of ice cream places, which isn’t really my thing, but most of them have a sorbet or froyo flavor or two so I can get that. The place we went to was packed so we had to wait a little while to get our cones, but it was worth it. I got a scoop of strawberry guava sorbet in a sugar cone and it was one of the best sorbet flavors I’ve ever had. I was so glad they ran out of the raspberry sorbet and I had to get this flavor because it was amazing.

We hit up Safeway to pick up some fresh fruit and a few other things. Going to Safeway on the first night is another one of our traditions (don’t ask me why). The store was playing some music over the loudspeaker and me and my sis cracked up twice when two different people started singing along to the songs. The store was pretty busy, too, so I guess the singers were confident 😛

The rest of the night was spent chillaxing back in the room, watching the news and getting ready for bed. I was pretty tired, but excited to actually start my vacation.

Do you have any vacation traditions?