Hey guys! Hope you all had a wonderful weekend. I have a quick recap of mine later in the post but first I want to announce who won my Alter Eco giveaway.

And the winner is… Sabrina @ Living, Learning, Eating! Congrats girl! Shoot me an email at ashlauren711@gmail.com so I can have Alter Eco ship out your goodies!

This weekend was Homecoming/Family weekend on the CSU campus so my dad made the drive up to spend the weekend with me. Two years ago my mom and sister were also able to come up but since I was still living  the dorm life then, we had to stay in a hotel. But now that I’m in a single lady pad (aka a one bedroom apartment) I can actually have people spend the weekend with me. We had tons of fun, despite the less-than-stellar weather. And by that, I mean it was literally in the 30s for most of the weekend. Not normal for October but it was still a good weekend.

On Friday night, my dad and I had a late dinner at Tasty Harmony, a mostly-vegan restaurant downtown. It was our first time eating there, but luckily it won’t be our last because it was so good! My dad isn’t a vegan or even vegetarian but he’s definitely willing to eat more plant-based foods. He got a garlicky hummus and veggie sandwich but I went with something a little more adventurous–the raw enchiladas. It was my first time eating a raw entree in a restaurant and it definitely didn’t disappoint. It was made with flax tortillas and filled with raw pepita “cheese”. It came with guacamole, salsa, cashew cream, a side of “rawfried” beans and a really good mixed greens salad. The beans were the real star of the plate–they literally tasted like refried beans, but our waiter said they were made with a mix of nuts and seeds.

Not my picture, but they looked pretty similar to this!

Now normally I don’t order dessert in a restaurant, partly because they rarely have a vegan option but also because it’s a big ED fear of mine. Well, I was really wanting one of their desserts because they all sounded so good, plus they were all wheat and refined sugar free. So my dad and I split a piece of carrot cake and it was literally the best cake I’ve ever had! Carrot cake is the only kind of cake I really like but I’d never had a vegan version until Friday. It was so cinnamon-y and just fresh tasting, plus not heavy at all. Well, that makes sense because Tasty Harmony makes everything from scratch, uses purified water to make their food and drinks (they even have a bar!) and most of their menu is vegan and gluten free. So it was definitely my kind of place and I hope to go back soon. My dad even wants to go back again!

Saturday morning we ran a bunch of errands, like filling up my car tires with air (sooooo fun, especially in the cold…NOT!), getting gas and grabbing some snacks at Whole Foods for the tailgate. Of course I couldn’t go a week without going to Whole Foods 😉 I got a few really tasty things, like black bean dip and veggie chips, plus some old favorites I was running low on. Then we had a quick lunch (Whole Foods’ sweet spinach salad is a total winner!) and headed out for the tailgate. Little did we know how cold we’d be! I was wearing a pair of skinny cords, a sweatshirt, a jacket, boots with thick socks and I brought mittens but I was still freezing, even with a thick blanket over me for the entire game! It didn’t go below freezing but it almost did. Of course, today it was back to the 70s…that’s Colorado for ya!

I look pissed…I wasn’t, but I was cold!

You could see “The A” from the parking lot of the stadium. There’s a big A on the mountain because CSU used to be the agricultural school, aka the Aggies.

The game itself…well, let’s just say that CSU sucked. As usual. I’ve only been to two of their games (the other one being the homecoming game 2 years ago) and they only won that first one. They only win a few games each season but it was still fun to cheer them on. The stadium was probably halfway full (since it was so cold out) but by the 4th quarter it felt more like a high school game by how few people were left! CSU was playing against Fresno State and both teams had pretty awful offensive lines so Fresno only got a few touchdowns, but CSU was scoreless until the end of the 4th quarter. They finally made a touchdown, so it was totally worth it to see them get a score right at the very end. 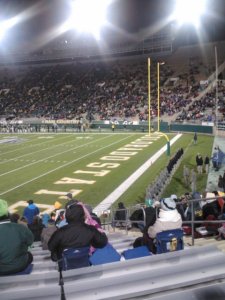 Go Rams (even though you aren’t the best team)!

On Sunday we ran a couple more errands, went for a long walk around campus and checked out some flowers (that were sadly dead) and had gelato for lunch. Yep, sometimes it’s totally acceptable to skip lunch in favor of the best gelato in the world. At least in my opinion! Guess what flavors I got? Pumpkin and soy chocolate. I am so predictable 😉 But seriously, I couldn’t not get pumpkin this time of year, and it was just begging to be paired with chocolate. My dad also got pumpkin and we agreed that it was perfect. We even got to eat them outside since it was way warmer, like in the mid 50s. Yeah, totally not warm but it felt like a heat wave after Friday and Saturday!

One of the best gelato flavor combos!

Before my dad had to head back home, I made dinner for the two of us. I used some Whole Foods multigrain pizza dough (love that stuff) to make us a pizza. It was half red sauce with artichoke hearts, half vegan creamy garlic sauce with navy beans and kale. My dad went for the red sauce side and I went for the garlic side. He loved it, so I got him to eat two meatless meals this weekend and he loved both of them. I’d call that a major win!

Now it’s back to normal…or maybe not. I have a lot to do this week, like a midterm on Wednesday and a group video project to work on. Plus my fridge has been acting up and not keeping things cold enough. A repairman came by earlier and said he fixed it but I haven’t noticed much of difference yet. We’ll see though. Hopefully it’ll be fixed soon since I can’t live without a fridge!

What was the most fun thing you did this weekend? Have you ever gone to a cold football game?