So I’ve been sorta absent around the blogosphere for the past few days, and I’ve really been missing it! I wish I would have been able to post/comment more, but this weekend was move-in weekend at my college, so I was super busy with that. But now I’m back in action 😉 And I’ve got a surprise for all of you…a virtual tour of my new place!

I would have loved to have lived in a campus apartment this year, but my parents thought it would be better to try for those next year, since I don’t have a car and I applied for them too late and the selection was small. I was originally supposed to be in the same dorm building as last year, except on a different wing and in a double-as-single room (a double occupancy room without a roommate). But apparently, in June, my school realized that too many freshman were enrolled than there was housing, and they sent me an email telling me I could upgrade to an actual single room in a much-newer dorm (it was built in 2004!) with a suite-style bathroom for the same price I was paying for the double-as-single. Well, that was a total no-brainer! So here I am in an air-conditioned dorm that seriously looks like a hotel on the inside and out, and I couldn’t be happier! Now I can do (almost) whatever I want in my room without worrying about a roommate’s disapproving look (not that I do anything that weird…) or awkwardness (a la last year). And I don’t even care that I’m only one of the few sophomores on my floor. It actually feels cool to be older-slash-more mature than all the freshies in my hall.

Sink shot! It's way messier than my sink at home, mostly because this sink area is teeny tiny. 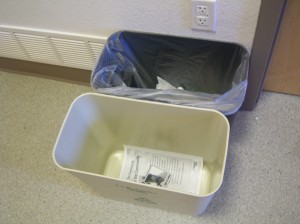 Trash and recycling. Going green is cool, yo. 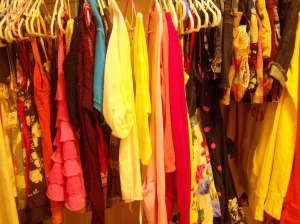 My lovely closet-behing-curtains, which has (almost) as much room as my closet at home, except it's not a walk-in. Bummer. 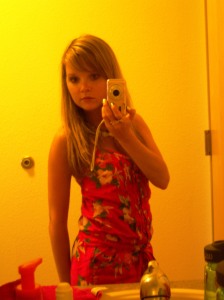 Testing out the self-pics in the mirror. The lighting sucks, but other than that, pretty decent.

The mystery door. Actually, it leads to the bathroom I share with my 2 suitemates, but I didn't feel like being a creeper and actually taking pics in the bano. It's basically just a toilet, shower, and some towel bars.

My lovely widescreen TV on top of a dresser covered with fashion magazines and my jewelry tree. Wouldn't it be legit if jewelry grew on trees?Fridge--numero uno. Oh yeah, I went there. Such a rebel with 2 fridges. This one is my makeshift "freezer" so I can store more frozen yumminess, like veggie burgers and frozen mango. Being rebellious is worth it.

Microwave and pretty pink dishes! I love having real dishes, even if they're plastic, because it feels more like home.

Fridge numero dos. This one works double duty, as a fridge and as a white board. Le-git. 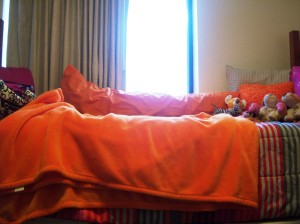 The bed, aka the couch, aka my new breakfast table. Eating breakfast in bed lives up to the hype. 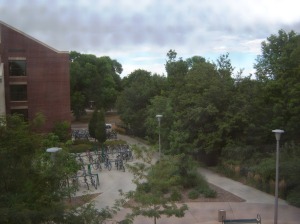 View out my window: I’m 3 stories up, which is nice because no creepers can watch me!

Food stash! I have another bag in my closet, a drawer with some bars in it, and a drawer stuffed full with all kinds of food. I think I'm set for a while...

The "mural" on my wall, plus floor lamp from IKEA. Doesn't this just scream "happy"?

Desk, aka study (or not) station. It looks messy, but it's really not, it's just big and has plenty of space to put stuff. Like an amazing lamp I got from IKEA. I love orange.

What’s your favorite part about moving into a new place? What do you think is the best part of my new room?