Wow, it’s been both a long and short 2 months since I last posted! Life has been truckin’ right along — work has been…well, work…but I’ve  also had some really nice weekends. Since my last post, I’ve been transitioned to working Monday  through Friday so now I get actual weekend days off, which is a blessing and a curse.

Instead of trying to catch y’all up on the past 2 months,  why don’t I just share a fun and easy survey that I’ve seen floating around. At this point, I’m just trying to get through the last 3 days of work this week (no work on Christmas, which is lucky for me) and then flying home Saturday morning. Better late than never, right? So here’s something quick to get me back into blogging!

4 Movies I’ve Seen More Than Once
1. Mean Girls (I quote it all the time with my sister)
2. Devil Wears Prada (probably my favorite)
3. A Christmas Story (the BEST Christmas movie)
4. 1776 (my favorite movie-musical…history nerd alert)

4 Books I’d Recommend
1. Sisterhood of the Traveling Pants series
2. A Series of Unfortunate Events series
3. Any Dave Barry books (he’s so funny)
4. Peace, Love & Baby Ducks (reminds me of my relationship with my sis)

I still want to move back to my desert home.

4 Places I’ve Been
1. San Francisco (a mission trip in HS…but now I wanna live there)
2. Salt Lake City (to visit my bestie in October)
3. Galveston, TX (a few times since my aunt and uncle live in Houston)
4. Orlando (Disney World back in 2006)

4 Places I’d Rather Be
1. California
2. The mountains
3. Home in Colorado
4. On vacation anywhere

Worth the 2 hour drive to OKC for these vegan babies.

4 Things I’m Looking Forward to Next Year
1. More outdoor running (I hope to keep doing it through winter)
2. Getting a new job/moving (I currently have a love/hate relationship with my current job and I hope by mid 2015 I will be in one I actually love and living in another state)
3. Possibly taking more trips (having a job=money and I want to spend it on travel)
4. Center of the Universe festival in July (if I’m still in Tulsa)

What are you looking forward to in 2015?

You might be thinking right now, “Wow, 3 super-taboo blog world topics in one post? This girl is cray.” I can’t necessarily dispute that last statement 😉 but as much as I think these issues have been discussed to death lately, I needed to provide my own views on the topics. Amanda had a great post on this last week and it really got me thinking about how bloggers put too much emphasis on what they’re putting into their mouths and how much they’re moving their bodies. Health is important of course, but not when it becomes obsessive.

So first, my thoughts on feeling full. I have to admit, I don’t have the best relationship with this feeling. I have always had a small stomach capacity, so I’ve never been able to eat much without feeling fuller sooner than others. I’ve mostly resolved this issue by eating 5-6 small meals every day and this works for me. But, I still experience very negative emotions when I do get full. Generally, I only feel truly full after meals out, since restaurant portions tend to be larger, and even if I don’t eat the full amount, it can still be overwhelming, no matter what it was I ‘filled up’ on. Let’s look at two examples from this weekend. On Thursday night, my family came up to my apartment because my sister had a college visit at a college nearby and they wanted to save money on a hotel. We went out to eat at one of my favorite restaurants up here, and I had a delicious, individual-sized pizza with kale, garlic, figs and grilled onions on thin crust. I ate 4 out of 6 slices, along with a small orange cream vegan and gluten free cupcake following. After eating, I felt satiated but not too full. Usually, I would feel quite full for maybe half an hour, and feel some guilt over eating ‘that much’ but we ate fairly late and I hadn’t had much to eat in a few hours. However, the following day my mom and I got Qdoba for lunch. I had my usual, the naked veggie salad with black beans, habanero salsa and lots of guacamole. I ate most of the salad, and when we ran errands afterwards, I could sense that I was full, and it messed with my mind for most of the afternoon. Why was I feeling so full after basically just eating lettuce, beans and avocado? I felt guilty for eating most of my lunch, even though it was healthy and balanced. 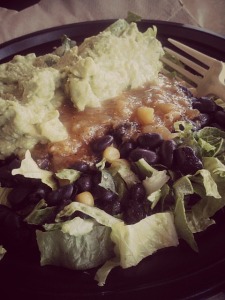 The meal that made me feel more self-conscious about fullness.

Basically, I just have guilty feelings associated with being full, no matter what I got full from. I don’t think this is a healthy relationship to have–I’m not saying feeling full after every meal is necessarily good either, but it’s okay to feel full from a meal every once in awhile,  especially if you enjoyed it while eating. And some days, we just aren’t as hungry, and can get filled up from even little meals, and we shouldn’t beat ourselves up about it.

I didn’t get in any tennis this weekend, but I was ok with taking a rest day on Friday.

About rest days. I’m bad about taking them myself, but I absolutely believe they’re essential for everyone, from pro athletes to casual exercisers. Since I’ve been exercising regularly (for about the past 2 years), I’ve rarely gone a day without some form of a workout. There were a few days when I was out all day and didn’t get in a traditional workout, but I was on my feet all day running errands or shopping and I counted that as my workout, since it was pretty strenuous after a full day. But even on the days when I exercised a little less than the day before (usually because I was too busy), I freaked out. I would love to say I work out just for the good feeling it gives me, but that’s not entirely true. I also do it for the calorie burn, and because it makes me feel okay with eating. Sad, but true. But on Friday, I worked on my exercise guilt. Since my family was up here, and then we headed back to the Springs after my sister’s college visit, I couldn’t fit in a lifting session or even a quick ab workout. I wasn’t completely sedentary (my mom and I ran errands around town for an hour or so) but I didn’t do much other than that, and surprisingly, I was kinda ok with taking a rest day. Sure, I got right back into my routine on Saturday, but it helped me realize that a rest day here and there isn’t the end of the world. In fact, it might help with exercise burnout, and in preventing overuse injuries. I’m not sure if I’m ready to take a full rest day every week, but I’m hoping to get there soon.

Finally, onto intuitive eating. This one has been discussed so much lately, so I don’t want to go into too much detail here. But I do think it’s been misconstrued a lot. I think moving away from calorie/macro counting and measuring is a great thing (and something I’ve been doing since the beginning of the year) but not when it turns into something that isn’t intuitive at all…orthorexia. I know, because I’ve fallen into it myself. I’ve become more hyper-focused on the ingredients in the foods I’m eating, and it’s been obsessive at points. It might seem healthier than calorie counting, but it can be just as destructive. When people start saying they’re eating intuitively, yet still stick with ‘safe’ foods, that could be a red flag for orthorexia. When someone’s obsessed with clean ingredients to the point that they get anxious about eating foods they don’t know the ingredients for (I’m guilty as charged), it could be a sign of orthorexia. Intuitive eating isn’t about stuffing your face with cake or ignoring all healthy eating guidelines, but it isn’t about eating ‘clean’ 24/7. It’s about being flexible, sensing fullness, enjoying your food and not letting it rule your life. I feel like I was pretty good about eating intuitively this weekend. I had everything from fancy vegan pizza, to nori wraps, to Larabars, to a vegan gluten-free cupcake, lots of guac and roasted veggies to protein smoothies. I ate pretty balanced everyday, enjoyed all of my food, didn’t freak out too much when I felt a little fuller than usual and didn’t overthink my choices as usual. I know this is something I’ll still struggle with, but feeling more free is a great thing!

A healthy weekend option, balanced by vegan desserts and pizza!

What are your thoughts on fullness, rest days and intuitive eating?

Hey lovelies! Hope your weekend is going well for you so far. Eeeee, I still can’t believe it’s September. And tomorrow is the 10th anniversary of 9/11 for all of my fellow U.S. bloggies. I can’t believe it’s been that long since the terrible tragedies of that day, it seems like it was just yesterday. Anyways, on to happier thoughts!

So I started this new thing on my fashion blog where I feature a mini-slideshow of all the things that are inspiring me during that season. Natch, I  borrow photos from weheartit (love their stuff!), and I include everything from style to beauty and even just random seasonal things. Here’s my debut of the fall slideshow in inspiration board format!

Yeah, a lot of them are completely random-ish (like the pumpkin cupcakes and the Starbucks cup that says you’re extremely hot–bahaha I love that one 😉 ) but most of them are very inspirational to my style this season. I love love love Emma Stone–she’s so down-to-earth and I wish I could pull off her amazingly-rich red hair. The Coach Poppy wristlet is totally adorable and I like the combo of pink and silver (in fact, it’s on my nails right now!). The A&F billboard, well…that’s a given 😛 I love A&F, especially their hot half-naked male models. Yum. I’m really into boho hippie fashion right now so I’d love to have a headband and shades like the girl in the middle does. The iPod cases with little bows is just too cute. I’m going to find a way to incorporate pastels and bows into my wardrobe this fall without it being a faux pas. And gosh, who wouldn’t totally adore those cheetah lips? Fierce, I tell ya 😀 I am dying to figure out how to create that, and also to pull it off without looking like a freak.

What are you inspired by this season?