Hi guys! I feel like I haven’t posted in forever! I guess that means I’ve been living life. A lot of it’s been work (40+ hours per week…yay for being an adult?) but some of it’s also been fun. And of course, that’s what I’ll be sharing!

My usual ‘weekend’ days are Monday and Tuesday, but last week it was Friday and Saturday, which meant I almost had a normal weekend. Usually I spend my days off running errands, going to the pool and running, but I wanted to do some fun things so I did.

On Friday, I drove to OKC. It’s about an hour and forty five minutes from Tulsa, which is just long enough to enjoy jamming out to my favorite Alt Nation songs without getting too annoyed with being stuck in the car. I’d never been to OKC, much less by myself, but I was ready for the adventure! I kinda went to find the airport since I’ll be flying out of there in just over a month (flights are cheaper out of there than the Tulsa airport) but mostly because I was dying to try an all-vegan food truck and cupcake place. Leave it to me to drive 100 miles each way for vegan food 😉 But it was sooooo worth it.

I enjoyed this amazing GF enchilada bowl filled with some of my favs.

I also did a little shopping at the giant mall and made the most of my day in the city. There were some frustrating moments when I wasn’t quite sure where I was going, but it was fun to do a little exploring. I think I like the vibe of Tulsa better, but OKC has some decent vegan/vegetarian places. And it was great to be able to do things at my own pace without worrying about going to places someone else wanted to.

I hiked 5 miles all on my own and didn't get bored!

On Saturday, I slept in til 9 (which is great for someone who has to wake up at 2 am for work…not even kidding) and then hit the trail for a solo hike. Also something I’ve never done, but I learned a lot from. I’ve come to appreciate hiking, something I hated as a kid when my parents would drag me along on camping trips. But dang, I was so lucky to get to explore the Colorado mountains at such a young age. I miss them now. But Turkey Mountain (not a mountain by my Colorado semi-native terms) is a decent sub for now. And I kinda lost myself on the trails which was awesome. I planned on hiking 3 miles, but after I finished a 1.5 mile loop, I went off on another trail and ended up hiking another 3.5 miles. Whoops! But it was a blessing in disguise, despite the 100 degree heat. I loved just being in nature, alone, and being able to appreciate it all. 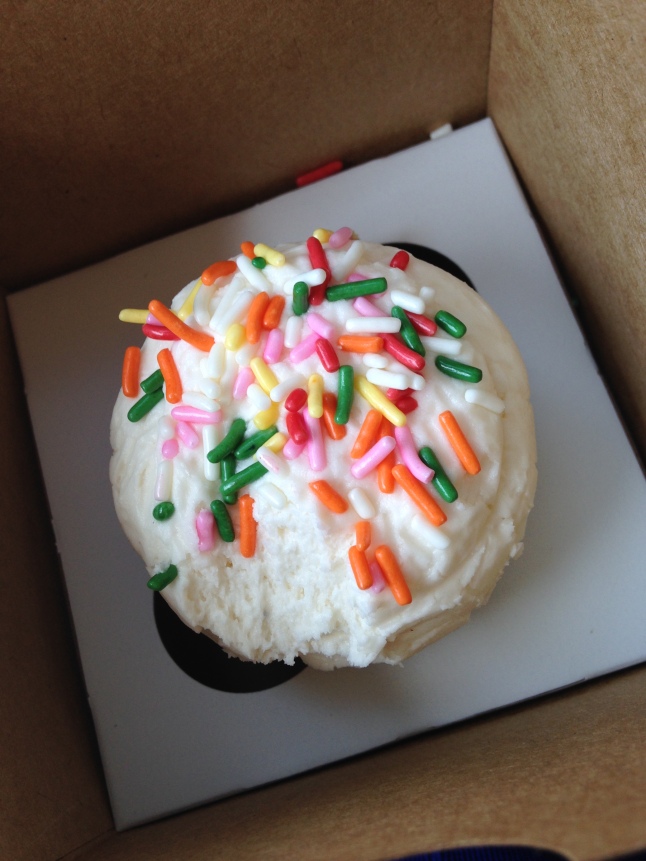 Vegan cupcakes are always worth it!

Since living completely on my own, hundreds of miles from the people closest to me, I’ve really learned to love doing things on my own. That’s not to say I don’t do things with other people (I just went out to lunch with one of my co-workers, and I hung out with some other work people at a going-away party downtown last Saturday night) but I don’t have to have other people around to have fun. Some things can be even more fun doing them alone, because I can do exactly what I want.

The face of a happy solo hiker.

In a few weeks, I’ll be taking my first solo plane trip to visit my friend in her new city. It’s incredibly exciting, and a little scary, but I can’t wait. The feeling of being independent makes me so proud, and I love that I’ve grown to be so comfortable with just myself. Sure, sometimes, I feel judged for shopping by myself or whatever, but it makes me feel good, so I don’t care. And it makes me appreciate the times I do things with other people even more.