I’m joining up with Thinking Out Loud again this week to talk about something close to my heart: body image.

We’ve all heard the (completely untrue) phrase “real women have curves”. And we all know the backlash that phrase has created. Of course, I completely disagree with this statement and I think it can be really harmful.

See, I’m a curve(less) girl. Always have been. Not only am I petite, but I’m totally straight up-and-down. During middle school and high school when I noticed my fellow classmates developing boobs, butts and just curves in general, I wondered when mine would come. But after going through years of an eating disorder and emerging on the other side still curveless, I’ve come to embrace my natural body type. I’m a proud member of the A cup club (if only that were a real club!) and I literally have no hips. One reason why it took me so long to be okay with my body is just that. Having no hips means my thighs are naturally close together, and I’ve never had that coveted thigh gap (when my feet touch), even when I was severely underweight. For the longest time, I thought my thighs touching meant I was fat, but it’s really just because of how my body is built. Some women have thigh gaps, some don’t and that’s okay! 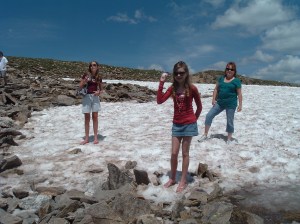 This is when I was near my skinniest (and unhealthiest) and my thighs only didn’t touch when I was standing with my feet apart (July 2009).

I’ve grown to love my body type. I’ve learned how to dress to enhance it — having a boyish shape means dresses with no structure absolutely drown me and I can’t really pull off the high-waisted shorts look. At the same time, I can wear strapless dresses and tops without looking too sexy (and honestly, I will probably never be considered ‘sexy’ and that’s okay) and I can get away with wearing shorter hemlines because they aren’t too revealing on my smaller frame. Sure, sometimes I feel like a twelve-year-old girl in a bikini because I don’t have that hourglass shape that most women do, but most of the time, I wouldn’t want to change my body type at all.

Also, this isn’t necessarily about being thin. Plenty of thinner women out there DO have curves and some like me don’t. The point is, there isn’t one body type that defines a woman! 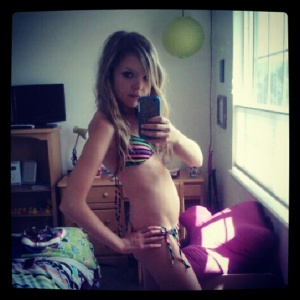 So am I not a real woman because I’m shaped like a ruler? Of course not! I’m just as much of a woman as any other female out there and NO ONE should be made to feel less than just because of how they look. I also want to apply this to transgendered women, who probably feel even less like women in certain instances. I believe anyone who identifies as a female should be treated as such!

Moral of the story: don’t let societal standards or stupid phrases keep you from being who you are!

How do you feel about the phrase “real women have curves”?

25 thoughts on “Confessions of a Curve-less Girl”