Do you ever get cravings for something that you’ve probably never eaten before? No? Let me explain…

Sometimes I see a recipe on a blog and it looks so good that I want it right there and then. Understandable, right? But some cravings are a little more complicated. Like my craving for tuna salad.

See, I’m pretty sure I’ve never actually eaten tuna salad. Despite liking fish growing up, the idea of tuna salad grossed me out. When people would eat it, I would turn up my nose at the smell. My high school cafeteria served Subway sandwiches and without fail, the tuna salad sub would always be the lone remainder at the end of the lunch period. I think it’s one of those comfort foods for some people, and I’ve never understood why.

But at the same time, I crave the idea of tuna salad. I haven’t eaten fish in years and I’ve always hated mayo–even vegenaise is a no-no for me. But I love that ocean-y taste and creamy texture that tuna salad provides.

I decided to veganize and simplify the classic tuna salad. I know there are plenty of vegan recipes for it out there, but none of them appealed to me. Most of them included vegenaise, or pickle relish, or some other random ingredient that I don’t have and I don’t want to buy for one recipe. So I went for things I already had in my pantry and fridge. Chances are you might have most of these things too! So let’s make tuna salad…vegan & healthy style! 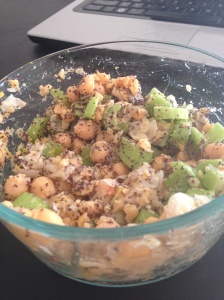 1 can no-salt chickpeas, rinsed and drained

1 tbsp kelp granules (can use dulse flakes or nori)

In a large bowl, mash chickpeas to your desired texture. Add in celery, spices, kelp and lemon juice. Stir until combined. Serve with flax crackers, on toast or on top of greens. Makes ~2 cups.

Do you ever crave weird foods?

3 thoughts on “The Easiest Chickpea ‘Tuna’ Salad Ever”