I’m writing this post from my tablet since my laptop decided to freak out on me and not turn on. All I gotta say is, thank God this didn’t happen last year when I had to write papers and I’m also glad I got a bluetooth keyboard for Christmas. It makes post-writing on a tablet a little easier!

Current Book: Ha, me read books? When I’m not in school anymore? I’ve been taking a much-needed hiatus from all books since finals week but maybe in a few months I’ll relearn how to read for pleasure!

Current Music: I’m back on the alt music train after Christmas. I’m really loving Tennis Court by Lorde. Yes, I know everyone’s still gaga over Royals, but lets be honest, that song came out on Alt Nation last summer and was only recently picked up by the masses. I prefer some of her lesser known songs.

Current Guilty Pleasure: So Delicious brand no sugar added chocolate coconut-milk ice cream. I know, I know, who says sugar free ice cream is a ”guilty pleasure”? Honestly, it’s not really other than the fact that it costs $6/pint at Whole Foods and is sweetened with erythritol (which is better than most fake sweeteeners). Really though, it tastes like the fudgsicles from my childhood and who wouldn’t want that?

Current Drink: Waterrrrr. How boring can I get?

This is way better than delivery!

Current TV Show: The Newsroom, as usual. My dad and I only have one more episode of the 1st season left on Netflix 😦 Then we have to wait awhile til season 2 comes out on DVD.

Current Celebrity Crush: Mila Kunis. She looked stunning at the Golden Globes (when does she not?) and she’s always an amazing actress, whether in funny movies like Ted or more serious ones like Black Swan. Plus I love her voice–it makes me feel less self-conscious for havng a low(er) voice. 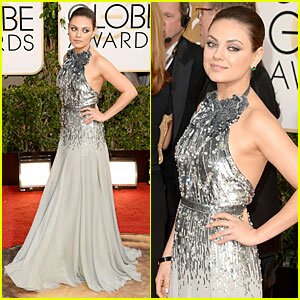 Current Wishlist: More blazers (I have a newfound obsession with work-appropriate AND cute clothes), more money left on my iTunes giftcard so I can buy more songs I’ve been wanting for awhile, for it to be spring already (I’m already sick of winter and we haven’t even gotten it that bad yet), for my doctor’s appointment next month to be helpful (there is probably some serious underlying issue that will explain my skin problems/digestive woes/lack of period for almost 9 months).

I have an addiction...to clothes shopping!

Current Triumphs: Keeping up with applying to jobs (more on that below), trying to reconnect with my sister (we got in a huge fight last week and I’ve been trying to show her how much I care
about her, even if she doesn’t have time for me right now), working on feeling confident in myself in various ways.

Current Bane of Existence: Not hearing back yet from ANY of the jobs I’ve applied to. I know it’s only been a few weeks or even days for some of them (the first application was sent out on December 28) but I dunno, I was expecting to at least hear something, at least confirmation that the stations I applied to received my resume/cover letter. My dad said it may take a few MONTHS to even hear anything, which is discouraging. I’m going to keep plugging away though and applying to at least 3 TV stations each week. I’m just so impatient–I want a job NOW!

Current Outfit: This was actually from when I went shopping in Denver with my mom this past weekend. The sweater is new, from Christmas, and I love the slightly cropped length and lace detail. The jeggings are my new favorite, black, from American Eagle and scored for only $13!

What are some of your currentlies?