Sometimes, you can’t do much better than the classic alliterative title! And with that, here’s another WIAW…

My city is just getting hit hard with natural disasters, after last summer’s fire, this summer’s fire (which hit even closer to home for me and my family) and now flash flooding on the southwest side of town. We all knew it would happen eventually with the burn scar in the foothills meaning no vegetation to slow down rainfall, but no one imagined it would happen after just half an inch of rain fell in half an hour! Luckily, they were able to clean up the streets and businesses that were affected very quickly and by the time I made it over there on Tuesday, it looked normal, aside from tons of mud near the creek. The perks of being in TV news is that you’re always the first to know about things, and you can always get a close look at whatever happened, which is good for a person like me! 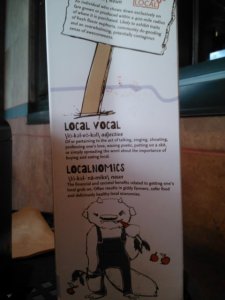 I wanna be a localvore!

I really love this new campaign Whole Foods has going about focusing on local food. I’ve become passionate about buying local, and even though it’s hard to get really good local produce in CO, Whole Foods does stock local produce when its available and a lot of the products I love to buy, like Larabars and raw kimchi, are produced in my state! Once I move to a better produce state (ahem, CA!) I hope to exclusively buy locally-grown produce.

And speaking of local, I happened across this gem on a random trip to the Whole Foods I rarely frequent. It’s smaller than the one I prefer and farther from where I live but I wanted to see if they had anything different. I’m so glad I did, because I have yet to see this new brand at the WF I usually go to. I spotted the “I’m a local” tag and the awesome flavor combos and was instantly intrigued. I mean, what other brand has cherry vanilla almond butter, or blueberry cinnamon walnut butter? I decided to get the dark chocolate coconut one since I knew I’d like it, but now I wish I’d gotten the espresso hazelnut one too! The best part is, there’s no added sugar aside from dates and the only added oil is organic coconut oil, which is the healthiest kind. I’ve never been a fan of the flavored nut butters that have added sugars and gross oils that some bloggers like, but now that I have a cleaner, more natural flavored nut butter option I don’t have to go without! 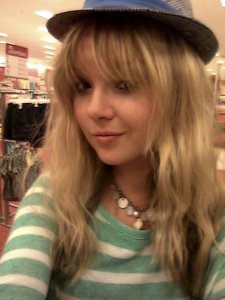 A good look for me?

If you think this hat looks too small for me, that’s because it is. It was technically found in the little boys’ section at Target, but lets be honest, I rock it better than any little boy would 😉 Ok, maybe not, but my sister and I had way too much fun at Target the other night. Insider’s tip: if you ever want to joke around in Target and generally just act immature, the best time to go is after 7 pm. Fewer people are there so you can be obnoxious and take silly photos without anyone caring.

I took advantage of the half off Refreshers deal at Starbucks last weekend and tried the new Valencia orange flavor. Not bad, it reminded me of Sunny D actually, but it wasn’t my favorite (I prefer the lime). I’d love to mix this with vodka or something for a citrus-y cocktail though 😀

After going without it for 3 weeks, I caved and got some Whole Foods salad bar…twice in one weekend. I know I have problems, but I wanted a break from it for awhile to see if they started rotating in new things and they did! I’m now in love with these homemade bread-and-butter pickles they have (they’re obviously fresh!) and their addictive curry roasted nut mix. Obviously, I got some greenage in the form of romaine lettuce, and I got my favorite curried tofu salad because Whole Foods does tofu right and I realized I’ll never be able to make it as good so I gave up on buying it. Oh, and get this: one of the nights I got the salad bar was with my sister (before said Target outing). The weird thing is, she loves the salad bar as much as I do, but for very different reasons–the macaroni and cheese, and the Caesar salad. Sometimes, I think we come from two different families 😉 Just kidding, but we eat completely differently, which is funny that we both have a place we love.

After being busy at my internship, I haven’t felt much like throwing anything together that takes more than 5 minutes. I’ve also been craving salads, because all I have time to scarf at my internship is a Larabar, some berries/grapes and baby carrots. I’ve still been sticking to mostly raw, but I threw in some navy beans mixed with nooch and garlic gomasio (basically garlic, sea salt and sesame seeds–soooooo addictive!) and called it a well-balanced dinner…with some water and watermelon on the side. 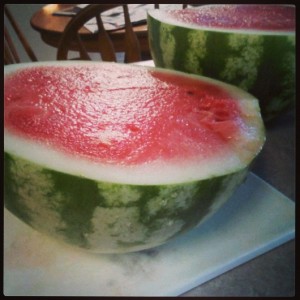 My favorite right now. I could eat this. all. day. long.

Speaking of watermelon, it’s my favorite fruit at the moment. It’s just the best when it’s straight from the fridge, especially on a hot day. I hope summer never ends, so I can eat watermelon forever.

Sometimes, it’s good to be spontaneous and just enjoy life. I love spending time with my sister because she brings out the best in me. We always have fun together and I’m gonna miss her to pieces when I graduate in the fall. Only we could have fun wearing kids hats and taking embarrassing pics of us wearing bras over our clothes (don’t ask)!

For those of you who live in Canada, I hope you had a nice Canada Day on Monday and for my fellow American readers, I hope you enjoy Independence Day tomorrow! My plans for the day are going to a parade and having water balloon fights with my family…fun stuff!