It’s been hard coming back to the blog world, after taking a week off for vacation and then returning to the real world. But something has made it harder than it would have normally been.

I don’t know how many of you have been watching the news lately, but a fire here in Colorado has started to make national news. It’s not just any fire, though. It’s the most destructive fire in Colorado history after just 4 days of burning…and it’s in my city. Not just in my city, but it’s where my family and I used to live, literally just a year ago.

All forest and wildfires break my heart, because sadly I’ve seen far too many of them so close to home in my lifetime. But the Black Forest Fire hits even closer to home, because I know the area so well. My family and I lived in Black Forest for 8 years, and we loved it, but we ultimately moved because the drive into town (particularly for my dad who worked across town) was getting to be too much. I lived there through half of my middle school years, all of high school and half of college, so it really was like home to me, even when I went off to college and only came back once a month or so on weekends. 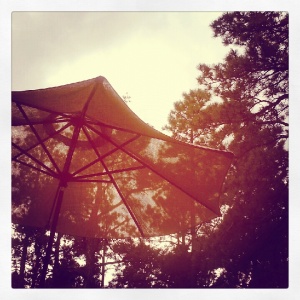 A photo of our old deck, about a month before we moved into town.

I only remember one other move in my lifetime, when I was 12 and we were moving out to the forest. I was excited for that, because the lot our new house was on was gorgeous, and great for an outdoors-loving kid like me. My sister and I enjoyed exploring our backyard, which was literally 5 acres, covered with ponderosa pine trees. It reminded me of camping up in the mountains, but it was all ours. We were truly lucky to live in such a beautiful place.

I was sad when we had to move just over a year ago. I loved having my own bathroom, a huge bedroom but mostly, the trees I got to see outside my window every day. Moving back into town was a shock, not just because I had to move into a smaller room, but the scenery wasn’t the same. 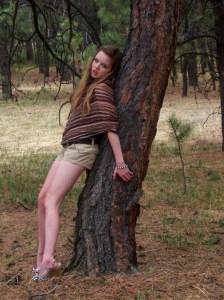 One of my favorite pictures taken in ‘our forest’, just 2 years before the fire hit.

I never would have imagined that such a destructive fire would hit the place I once called home, let alone just a year after we left it. I’ve dealt with fires before, namely the Waldo Canyon fire on the west side of my city last year, but this new fire just broke my heart. Not only did we once live out there, but my family knows a lot of other people who still live out there, and they were evacuated from their homes.

As I’m typing this on Friday, at least 400 homes have been completely destroyed. Up to 41,000 people have been evacuated from their homes, and are having to stay in shelters, hotels or with friends. The sad part is, some of these people may never get to return to the place they called home.

Though I don’t live out there anymore, the fire still weighs heavy on my mind. I worry about family friends who were evacuated, trails and parks that my family still liked to visit even after we moved, and our own house that we left last summer. I can’t even imagine what it would have been like if we had still been there, and were forced to evacuate and maybe even lose our house. I’m so thankful that we left when we did. And being an intern at a local news station has made the last few days even more stressful. I got back from vacationing in the mountains where a fire sparked in Rocky Mountain National Park on our last day there, to a massive plume of smoke hanging over my city. And the other day, I returned to my internship to a whirl of activity and stress as the station has been broadcasting basically 24 hours a day about the fire. It’s hard to escape the fire coverage, and it makes me feel so bad for the people who still aren’t sure what’s happened to their house. 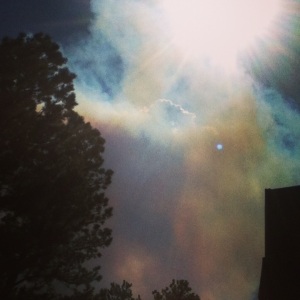 Smoke from the Big Meadows Fire in RMNP.

I’ve definitely rambled on more than I meant to, and I’m sorry for getting into such a personal post on my first day back, but any prayers and good thoughts are appreciated as my city and other parts of the state (and other states too!) are dealing with huge wildfires.

Have you ever dealt with any natural disasters near you?