One clean-eating college girl’s goal to save as much money as possible at Whole Foods and beyond.

Well folks, there’s just over two weeks left until I’m officially done with my junior year of college (it’s also just under 3 months til I’m 21, but who’s counting 😉 ). It actually feels so weird to be saying that–I feel like I was just in 5th grade. It’s crazy to think that a year (or less) from now, I could be at my first big-girl job. Wow.

Like I mentioned in my last CVB post, this little series will be taking a hiatus over the summer as I transition back into life at home with my family. Obviously I’m looking forward to that, and also to be taking a break from budgeting! I’ve learned a lot, but I’m ready to have my parent’s financial support again for a few months. Considering that I may be living completely on my own in a year, it’ll be nice to rely on my parents for a little while to save up money for that!

I went to both Sprouts and Whole Foods this weekend, but I’ll only be listing and photographing my Whole Foods buys here, as I feel like I’ve come a long way with my budgeting skills there. Not too long ago, I was spending at least $80 there per week, sometimes upwards of $100. Yikes. Lately, I’ve been reigning in my impulse purchases, and it’s helped me stay below $60 almost every week there. I even spent under $40 there the other week…and who says it’s called Whole Paycheck? You really can shop there on a budget (maybe not a super-tight one), you just have to watch what you’re buying. I even buy more expensive things there sometimes, and still come in below $60. 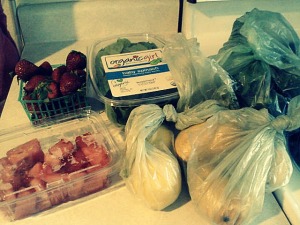 Verdict: I bought a LOT of produce this week (most of it organic) and it still didn’t eat up my budget! As I’ve said before, produce is typically about 1/3 of my budget per store and trying to stick with the Dirty Dozen/Clean 15 guidelines can help me save money and decide what really needs to be bought organic when I have the choice. Buying from the bulk section in only the amount I need saves me a lot (for instance, I bought 1/3 a pound of almond flour for only $1.88!) and looking for deals helps when I make impulse buys. I like the Tessemae line of dressings, and when I saw their new BBQ flavor was on sale for about half the usual price, I had to try it, especially because I’ve been looking for a clean BBQ sauce. Some things, like the coconut aminos, cost a lot upfront (at least more than traditional soy sauce or even tamari/Bragg’s) but the quality ingredients and taste are worth it to me, and it lasts me a few months too. Basically, I try to make tradeoffs and figure out what the ‘real’ cost of an item is (good ingredients, how long it’ll last, etc.)

Are better ingredients/nutritional benefits worth it to you over low cost? How much does the organic label matter to you?

10 thoughts on “College Vegan on a Budget: 2 Weeks & Counting”