Moving in the summer is no joke! It’s been at least 85 degrees here the past three days we’ve been moving stuff back and forth between our old house and our new one but it’s felt more like a million degrees in the house, especially carrying boxes and moving furniture around. I’m just glad I don’t live somewhere humid, so it’s sticky on top of being hot! I’m also glad we got our internet hooked up on our first full day of being moved in. It kinda sucks having to live without internet at your own house!

Favorite Workout: Walking to Starbucks with my sister

Like I mentioned in my WIAW post, we moved closer into town so now we’re nearby all the good things a city has to offer–like movie theatres, grocery stores, gas stations and…Starbucks! In fact, our new house is within walking distance of the ‘bucks! Okay, well if you consider walking distance a 20-25 minute walk in the blazing hot sun. Honestly, it wasn’t that bad though and going with my sister made it even more fun. And the drink was even more worth it since we had to work for it–win win! I love this Frapp flavor because it’s got a hint of caramely-ness (not a word but whatevs) that makes it perfect, and since it’s a light version with soy, it’s not a calorie bomb and I feel a little bit better about enjoying it!

Favorite Discovery: I love to drive…by myself

I have a liiiiiiiiittle bit too much fun while driving (no worries, this was taken in a parking lot!)

I don’t have a car of my own (yet…) but I’ve been doing a lot of solo driving lately and I’m loving it. It feels so freeing to sing at the top of my lungs to “Call Me Maybe”, go where I want when I want and . Hey, it happens sometimes, and as long as I’m not actually engaging in road rage, I think a few choice words here and there are okay 😉 Anyways, it’s been a lot of fun realizing the independence that comes from having a car.

No boring salad bar for this girl! It was totally worth the money!

I always get super jealous when I see people’s pics of Whole Foods salad bar boxes on their blogs. The last time I went (before Tuesday and Wednesday) was February. Lame! So I used the opportunity of us moving and being too busy and tired to cook to pick up some of their salad bar goodies. Both days, I got basically the same things because I loved them all–chipotle orange tofu, chilled sweet potato chunks with currants and some yummy sweet dressing, salted pistachios, acai kale salad, Mediterranean crunch salad and California quinoa salad. Ah-mazing to all of the above, especially the sweet potatoes and quinoa salad. I also picked myself up a dessert on the side both days, one time it was a giant vegan chocolate chip cookie that I split up for two nights and the other time it was a vegan chocolate donut that I split with my sister. Actually, she ate most of it and loved it, which was fine by me. She’s usually wary of vegan items but she’s been loving the vegan desserts I’ve been giving to her lately! To anybody who thinks vegan means boring, it most certainly does not, as evidenced by this salad bar box and every vegan dessert I’ve ever tried 😀 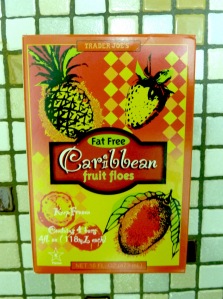 Not quite the same, but you get the idea!

I generally don’t eat popsicles–like smoothies, they don’t usually do much for my hunger because I can eat them so quickly. But sometimes, you just gotta have a naturally-sweetened, giant popsicle. Yesterday, I was getting over some nasty stomach issue that left me leaving kinda queasy all day plus it was hot and I was moving stuff around. So a popsicle from Whole Foods was in order! I liked it a lot because it was pretty big so it took me longer to eat, it was tropical-flavored which is always my favorite and it only had a couple ingredients besides the fruit in it. It quenched my thirst, cooled me down and left my stomach feeling a little better.

What’s something you’re willing to spend a (relatively) large amount on? What do you eat or drink when you’re not feeling so great?