Soooooo guys, I kinda lied to you last time at the end of my post when I said we were going sledding. We actually ended up going sledding yesterday since the state park we were going to didn’t have any facilities open on Monday or Tuesday and we didn’t want to be stuck up there without a bathroom–ummmm TMI!

What we did end up doing on Tuesday was even better–shopping! Obviously I am such a shopaholic, I will almost never turn down a shopping trip, clothes or grocery or otherwise. It’s just so much fun. We headed up to our favorite Denver mall for a day of shopping and eating out.

One major disappointment of the day was driving to Gelazzi (aka the best gelato place ever) and realizing that it was closed for remodeling! Yeah, uh, what is that all about? But no worries, we ended up checking out a new-to-us froyo place called Peach Wave and the disappointment ended when I realized they had several seasonal flavors to choose from. Me and seasonal flavors are BFFs, of course, so I ended up getting peppermint stick and chocolate froyos with raspberries on top. Boy was it delicious! I also sampled a few other flavors, including peanut butter, which was outta this world! But then again nut butters rock my world 😉

Shopping was hella fun, as expected. My sister and I headed out on our own, only to be surprised by how crazy the crowds were! I don’t think we’ve ever gone shopping that soon after Christmas so it was quite a shock. We even had to wait in a line outside of Hollister for about 5 minutes before they’d let us in since so many people were in the store 😯 It was hectic to say the least, but we got a ton of good deals and we both scored a ton of things! I seriously don’t think I’ve ever bought that many things at once!

I can always use another cute tank top...especially when it has the same name as me 😉 (A&F Ashley tank)

Abercrombie & Fitch, usually the calmest store at the mall, was packed with so many people that my sister and I got really frustrated! We did end up leaving the store with two purchases each in hand (for 40% off, too)–a pair of flare jeans and a lacy top for her, a pink striped sweater and ruffly grey cami for me.

Abercrombie Kids was also a zoo, but practically everyone in the store was much shorter than me–that’s what I get for shopping in a kids store, I guess. I did score this adorable lacy tank with a pinstripe bow ‘belt’ for less than $20 though! 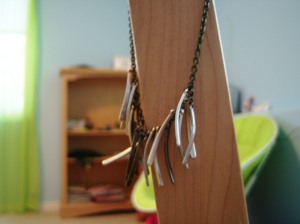 As if I really need more necklaces in my life... (AE)

How cute is this ring? (AE XO Ring)

American Eagle is the best place to get good jewelry cheap (okay, Forever 21 is too). I had a gift card to here that I spent completely on a necklace and a ring. I am basically jewelry obsessed and rarely go a day without wearing at least a necklace or some bangles. Apparently this Christmas I was really blessed with jewelry, since I also got another necklace and another ring as presents…

You can never have too much plaid (Hollister Manhattan Beach shirt)

At Hollister, I continued my recent obsession with plaid shirts and jeggings. I’ve been eyeing these corduroy jeggings for the longest time, and once I took the plunge and bought my first pair the other day I decided to get these too. Since they’re tan, they’ll look good with anything and will fit well with my brown suede boots and the new boots I got for Christmas!

I also did a little online shopping back at home, where I ended up buying grey lace shorts from Abercrombie Kids and a pinstriped oxford-type shirt from Gilly Hicks.

We ended our day in Denver with dinner at On the Border, courtesy of a gift card my mom got. I haven’t been there in years, not since I’ve gone vegetarian, but I was pleasantly surprised to find a delicious veg-friendly meal of grilled veggie fajitas. Fajitas are always good and this one did not disappoint–it was mushrooms, bell peppers, onions, squash, zucchini and topped with super-hot fresh jalapeno slices. You can bet I was downing a ton of water throughout the meal, but it was delish! The fresh guac on the side was also amazingly good. I’m also pretty sure that the fajitas are vegan-friendly, as long as you don’t eat the side of sour cream that it came with–so I was able to find a yummy vegan meal in a regular restaurant..wooooo!

Sledding yesterday was also oodles of fun! We drove up to a state park up in the mountains and spent a couple of hours racing down the hills on our sleds. On one really fast run, I ended up tearing our inner tube on a stick and it deflated 😦 But it was fun while it lasted, and we still had two other sleds to have fun on. I was surprised by how fast and far we could go, and also by how bumpy the runs were. It was also reeeeeeally hard to walk up the hills, but it was an awesome workout without really feeling like one! On our way back home, we hit up Starbucks and I bet you can guess what I got–my usual holiday drink, a tall skinny soy peppermint mocha. Definitely a day to remember!

What fun things have you been up to lately? Have you gotten any good after-Christmas deals yet?