Hey friends, what is up? Can you believe that we’re just 4 days away from Christmas (hence my title)? It’s total craziness if you ask me, but I’m definitely looking forward to Christmas Eve and Christmas Day for several reasons. One being I love the church service my family goes to every Christmas Eve, and I also can’t wait to watch the 24-hour marathon of A Christmas Story on TBS! That is my favorite Christmas movie, so hilarious and such a classic.

But enough about Christmas, let’s get on with this week’s WIAW! Is it lame that I’m always super excited for it? Nah, I don’t care if it seems dumb, it’s such a fun foodie party that I can’t not participate in it week after week. This week’s edition includes some random eats I’ve been loving lately, as well as a couple of recipes too–BONUS 😀 And apparently this week I was obsessed with Instagram…

As I mentioned in my NaNeFoMo bucket list post, I said I was planning on making some raw treats. Well, the first thing on my mind was raw salted caramel apple dip. I bookmarked this recipe a few weeks back and was just itching to test it out for myself. I made a few tweaks to it, though, but it still turned out yummy. Next time, I think I’d add a bit more salt, though, because it didn’t have quite the hint of saltiness I thought it would.

1/2 cup dates (the original called for Medjool, I used California pitted), about 12 dates

Soak dates in water for at least four hours (I did overnight) and cover. Drain dates and reserve soaking liquid. Blend dates and rest of ingredients in a food processor until smooth. Add in soaking liquid one spoonful at a time until it’s the right consistency for you. Use as a topping for oats, as a spread on fruit or bread or as an apple dipper, of course! Makes about 3/4 cup. 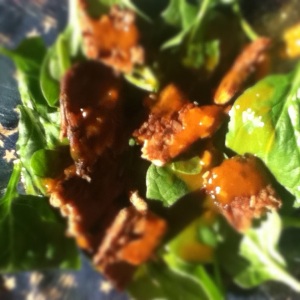 The dressing can really make or break a salad, but luckily, this one was a winner! I found it in the produce section when I hit up WF the other day, and it’s got a nice tanginess to it.

The perfect sides for a salad--a ripe Satsuma tangerine and some peanut butter balls cereal.

I’ve been craving hot cocoa lately, so I decided to whip up an easy mug of it. I just heated up some unsweetened vanilla almond milk in the micro, mixed it with some Hershey’s special dark cocoa powder and a packet of stevia, and topped it with a few pescetarian marshmallows. It was the best hot cocoa I’ve had in quite a while (I actually rarely drink hot cocoa), so I’m thinking almond milk is what made it amazing. But then again, what isn’t amazing about almond milk?

So remember me talking about how I’ve been obsessed with salads lately? Ummmm, well, that obsession’s gotten a little bit stronger since then. Since I got home, I’ve had a different salad for lunch every single day and it’s been glorious. Having fresh spinach leaves really takes them over the top. A good obsession to have, am I right? 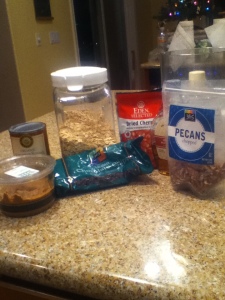 1/4 c pumpkin puree (I used butternut squash, since it was on hand)

In a large bowl, combine almond butter and maple syrup together until mixed; add in pumpkin and vanilla. In a separate bowl, stir together flour, salt and baking soda and then add in to wet mixture. Stir in chocolate chips, cherries and pecans until combined. Cover and chill batter for at least an hour. Preheat oven to 350. Scoop chilled batter with a melon baller onto baking sheet, spacing dough 2 inches apart. Bake until golden brown and just slightly soft, about 15 to 20 minutes. Set aside on baking rack to cool. Makes 12.

I loosely based this recipe off one from the Whole Foods website, but I made it vegan by subbing almond butter for dairy butter, maple syrup for white sugar and pumpkin puree for eggs. They turned out pretty good, a little small, but nice and “rugged” I guess. I like cookies that aren’t delicate–I definitely prefer ones like these that have chunks of good stuff in them! These cookies are pretty low-cal (about 120 per cookie) and you can feel good about eating them because they’ve got healthy ingredients like nuts and oats in them. But mostly you’ll just like them ’cause they taste good 😉

I made an attempt at making my own veggie burger last night, and it actually turned out decent, except it was too crumbly. I basically just mashed drained black beans and rolled oats together with a little chili powder and cooked it up in the skillet. It was a simple and delicious dinner alongside my favorite sweet potato tater tots and some peanut flour sauce for dippage. My kind of “burger and fries”.

What better way to start out the morning than with peanutty raspberry chocolate volume oats?

I have so much fun creating new oats combos. This one, like most of them, was a total winner, but then again when isn’t the combo of raspberry, peanut and chocolate delicious? Unfortunately, my supply of peanut flour is running dangerously low (no worries, another bag is on the way) so it turned out kinda runny but it still mixed well with organic jam and a few dark chocolate chips.

What is something you’ve tried again recently for the first time in a while? What is your favorite part of Christmas (if you celebrate it)?