Hi lovelies, how were all your weekends? I am beyond excited that it’s less than a week til Christmas, but I’ll save that excitement for later!

After having read a lot about NaNeFoMo (or National New Food Month) around the bloggy world, I decided to finally join in! Yes, I know it’s kinda late, but I have already made some progress and created a “bucket list” of things I’ve been wanting to try for a while.

1. . I finally sucked it up and ordered some online a couple of weeks back. This has changed my life, for real! I’ve had it practically on a daily basis since it first arrived in the mail (which is why I just had to order more!) and I’m definitely not sick of it yet. It makes an amazing paste, peanut sauce for stir-frys and salads, as flavoring for Greek yogurt and as a source of protein in smoothies. I even used it in place of flour in my festive garland bars. Definitely a new staple in my pantry!

The perfect topper for banana softserve and Puffins!

2. . These were (and still are) a fear food of mine, so I thought they’d be perfect to include in my list. I bought some vegan chocolate chips at Whole Foods, used them in a few recipes and now I love them! Yes, they’re still scary, so I only eat maybe a teaspoon or so per day, but I don’t want to deprive myself of dark chocolate ever again! 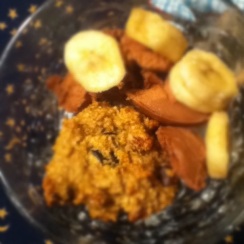 3. . Being home alone a week ago gave me the perfect opportunity to whip up a batch of homemade nut butter. But what kind to make? I had a bag of chopped pecans, so I mixed those up with some instant coffee powder, a little maple syrup and coffee maple pecan butter was born. You’re welcome 😉

Simple combination, but oh so tasty!

5. Kombucha. This one is very scary to me. Not a fear food, in the eating disorder sense, but scary because A) they’re expensive and B) what if they taste horrible? I’ve still yet to take the plunge on this, but I’m hoping maybe I’ll get to sample it at Whole Foods or something and see if it’s worth the price.

6. More raw/vegan desserts. Every one I’ve attempted so far has turned out amazingly well (even if I am the only one who ends up eating them…oh well, more for me!) and I’d love to do more experimenting in the kitchen over the next month. Raw desserts can be kinda “scary” since they include lots of calorically-dense foods such as dates and nuts, but they taste so good and are so healthy for you compared to regular desserts. A few things I have in the works include raw salted caramel sauce, vegan peppermint bark and another variation on my raw brownies with chocolate peppermint avocado “buttercream” frosting. This month sure is looking delicious 8)

One of my favorite desserts ever--raw brownie pie with frozen raspberries and nonfat coffee froyo.

So that’s my bucket list so far–three things down, three to go! I’m proud of myself for conquering one fear food so far and I’m looking forward to trying out new things, especially the recipes. While I like to make “tried and true” type things, it’s always rewarding making something brand new and having it turn out amazing. And if it doesn’t, it’s not a huge deal!

Are you participating in NaNeFoMo? Have you ever made a raw dessert?

24 thoughts on “Jumping on the Bandwagon”